How giving up alcohol and coffee changed my life 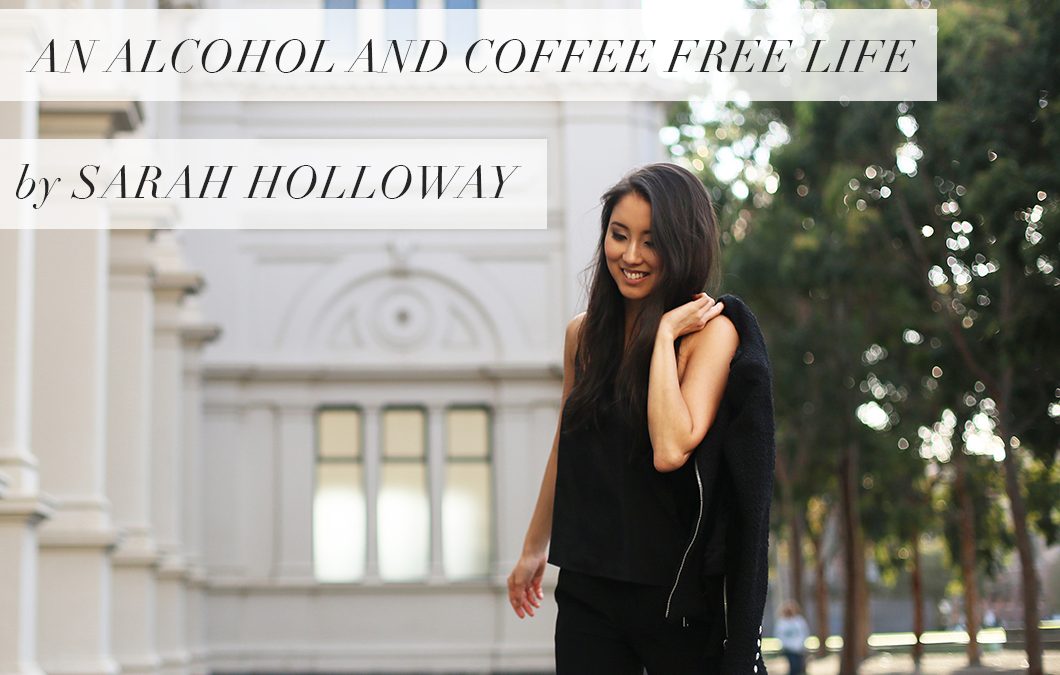 Ever wondered what it would be like to give up alcohol? My dear friend Sarah, Mumma of the amazing Matcha Maiden shares her views of going substance free, not just the alcohol but coffee too! Be prepared to be inspired, do you think you have what it takes?

I know you must be thinking that the “wonderful” in that title is either a typo or an indication that alcohol and coffee have been replaced with some other kind of drug. Nope! I’m just that crazy kid who is absolutely high on this beautiful life and excitable enough as it is without adding any other substances into the mix. It hasn’t always been that way though and many a witness can confirm that alcohol and coffee used to comprise an embarrassingly large portion of my liquid intake. So even though I gave both up completely a few years ago, you can rest assured you won’t be getting any religious, moral or goody-two-shoes judgment or preaching from me but, instead, a simple insight into what the transition was like in case you were curious or considering it for yourself.

With an oriental heritage, I was never able to hold my alcohol well at the best of times but I still pressed on for a solid decade or so. It took most of my teen years to learn what my limits were (which turned out to be a grand total of about one and a half shots), but once I had figured out how to get a bit happily tipsy and still avoid ending up on the bathroom floor, there was no stopping me. As an early starter to the party scene on the badass teenage house party circuit, I was in fine form by the time I graduated to the club scene in late high school/early uni. I enjoyed a few glory years hosting at a couple of Melbourne’s institutions giving the dance-floor a run for its money, which has left me with many fond memories (and an equal number of lost memories too… oops!)

To counteract the back-to-back four-day weekend benders and then make it through the week as a Law/Arts student, coffee was my other best friend. I also indulged in three overseas exchanges to France during my degree (as French was my Arts major), where 90% of the national diet is coffee, cigarettes and wine – when in Rome, right? Safe to say I have had my fair share of liver thrashing and am writing this article from a place of empathy and understanding of the sacred place alcohol and coffee have in many of your lives. But now I have come out the other end, I cannot speak more highly of my experience of letting them go and no longer find it even a little bit of a struggle. While I was forced into the lifestyle change initially, it is one of the most monumental things that has ever happened to me and I encourage you to at least consider easing up a little where you can (excellent timing for you all to jump into FebFast this month!)

So to explain why everything so dramatically changed, some unfortunate health issues hit me like a train in late 2012. A gluten intolerance, lactose intolerance, terrible allergic reaction to alcohol and a sulfa allergy all emerged in full force at the same time just after I finished uni. Tests in my primary school years had revealed these propensities, but they had never affected my lifestyle much so I thought I had gotten away with it. But, in the same way that some allergies diminish over time, others intensify with age. Suddenly bread would cause a pregnancy-level bloat, a cocktail would bring on a four-day hangover, and dairy would make romance absolutely impossible. Because I wasn’t aware what was happening, I just continued as normal which then led to a compromised immune system. I pushed through until the end of that year, in complete denial that my body had changed and that I needed to adapt. But after a few months of intense discomfort, frequent nausea, and deficient energy, I drew a line on New Year’s Eve and haven’t had a coffee or alcoholic drink since.

So as much as I would like to say I’m super disciplined and saaaaa healthy, this was less a choice and more a necessity because of how hard it is to be happy when you feel so unwell all the time. And I won’t deny that the beginning was extremely challenging, because I didn’t stop enjoying a drink or a coffee and had become so used to having both in my life. I don’t have an addictive personality, so while some struggle with cravings when they wean off coffee/alcohol/sugar etc, this wasn’t the worst part for me. What was most difficult was the social impact, which took me by surprise. There is nothing more awkward than standing at a networking event without a drink in your hand – what are you supposed to do with your hands?? I was still a lawyer at the time where drinks are a big part of work culture with clients, colleagues and other people you’re supposed to schmooze with. To survive a Christmas party with a room full of lawyers without a drop of alcohol is no mean feat! Similarly, when your friends all enjoy a good class of vino it’s really hard not to join in!

I was amazed at how odd people think it is that you don’t drink and how much drinking is seen as “the norm”. Social pressure, even if it’s not overt pressure, operates on all our minds making it harder to make independent choices.

I also found that many people were uncomfortable with me not drinking, fearing that I was judging them. So there were a lot of adjustments to make that came with the lifestyle change, but like any habit, change is possible if you just press on through the initial difficulty until it feels normal again. My best coping mechanism has been to use replacements without drawing attention to whether there is alcohol or coffee involved. At networking events, I nurse a soda water with a question mark as to whether or not it contains vodka. At coffee dates, I choose a tea or a juice without mentioning my reasons and no one even notices. If it does come up where you can’t avoid the topic, I just blame it all on the allergy putting everyone at ease. And once people get used to the idea, they leave you alone about it plus you realise it doesn’t actually matter what anyone else thinks!

There have been so many advantages to pushing through that initial discomfort most obviously being how much better I feel. Even if you aren’t ridden by allergies or intolerances, there are many benefits to reducing your alcohol and coffee intake. There is nothing I miss about hangovers and I have realised that Saturday and Sunday mornings are too precious to spend in the foetal position trying to recall how you got home.

My skin is clearer, my energy is higher, my immune system is stronger, and I no longer feel dependent on things to help me “have a good time” or relax in awkward situations

I’m quite a social being, but even I used to enjoy a quick bevvy to take the edge off or to unwind after a long day. When you don’t have that extra assistance, you can’t rely on stimulants to create those emotions for you, so I have developed much more confidence and found other, more natural ways to unwind and relax (hot tip – bubble baths) plus the bank balance doesn’t mind the change either. While it took me 6 months or so to fully adjust, nowadays I never get tempted and never look back! If you feel wonderful as you approach the end of FebFast, that’s how I feel all the time. Tea totalling for the win!